Chasing those pips on my first trading day of 2012

"The other qualification is "PATIENCE" to wait for the opportune time, when as many factors as possible are positioned in the traders favor. Poise and patience are the close friends of successful traders."

... Jesse Livermore - How to Trade In Stocks

What do you do when you have days where you make a great market call. Did not take the trades. And then, see it move in the direction that you made the call by 50 or 60 pips? Then decide to go in, and every single trade in that direction is wrong????

What do you do? And how do you handle it? 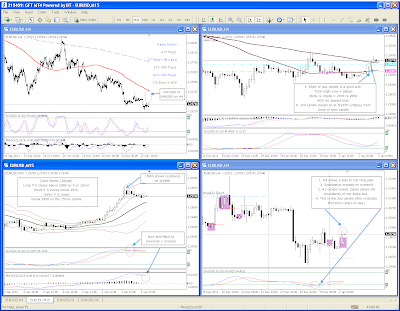 The 3rd of January was going to be a busy "mommy" day.

So I decided not to trade until the evening - which means late London session and through the first half of the US session for me.

But I did make my notes on the market in the morning.

I had a bias to go long around 1.2990 since $EURUSD had been down for so long. But I did identify a short potential in case it dropped past 1.2950

Having made all the analysis correct does not mean you (whoops I meant, I) will trade correctly.

Here's how I actually traded later that evening. (On a side note: I just found this really cool feature of MT4 that allows you to show the trades that you have done on the charts.  It's just drag and drop. Pretty darn cool!)

The first 5 trade entries and were all stopped out. Up until now, I really like going in with a tight 10 to 12 pip stop. But in all these trades, right after I got stopped out - EURUSD moved in the direction that I traded.

You can see by the 6th trade, I got so angry, I just went in the opposite direction for the heck of it. I did take this out quickly for a loss. So that loss trade is added to the pool!  So I am down by 6 bad failed trades. The first time I am trading for weeks.

Sheesh! On first trading day of the year as well. What a great way to start?

I am trying not to chase it.  I hate waiting...


Its as if the full force of every trading mistake has come back to smash you in the face. And you just have to stand there and face it. Basically I just feel kind of hopeless and pretty darn right stupid. Hopeless because I am fueled with this strong need to fix my earlier failed trades.


Plus I have  reduced my risk and my position sizing so that it does not make a huge dent in my trading account. Funnily enough, I still find that I have the same emotional attachment to those pips.


My other consolation is that if I get it right, I should be able to make it the lost pips in probably 3 or 4 trades. Heck, maybe it will take longer, it's part of the journey. I've since learned that it's a looong journey. At least, it's a journey for the long haul. And that to be successful, it's not that One Great Big trade. But a series of all those little ones combined.

But I do have to sit and wait it out. Heck, maybe I should sit out the whole day.

I guess, that's still taking a position and doing something.

I'm just going back to the drawing board and planning for the next trade. Instead of chasing those darn pips...


P/S. I took two more trades to make that eight losses in total. Then one trade that went in the right direction. But I got excited - was going to add in 1 more position. And I accidentally clicked myself out of the trade. Whoopsie! It went in the right direction by 10 more pips! But I was already out of the trade! I came to my senses (again!) and figured that I really had to stop trading until the end of that day.
Email ThisBlogThis!Share to TwitterShare to FacebookShare to Pinterest
Labels: EURUSD, trading psychology
Newer Post Older Post Home