Waiting for a setup is really hard to do.....

"You can succeed in trading only when you can think and act as an individual."

Waiting for a trade is one of the hardest thing for me to do.

Here I am (at the start of the London session - 09:15GMT) ... sitting on my hands. Trying very hard not to jump into this beautiful $EURUSD swan dive. It's painful watching all these pips go past.
The one big problem while watching 1M charts is that so many candles are being generated. Then MT4 keeps adjusting the size of the screen with the size of the candles. I am always re-sizing the right price bar of Metatrade. Telling myself that huge candle is actually a 3pip candle even though it looks like a 10-pip candle.  Most times, it's so mesmerizing, I want to reach out and grab some pips.

Still, I am working in my penalty box,  trading off a micro account instead of a mini. Plotting and planing my way back to a mini account. Nyah, hah, hah...yes, that was my evil laugh.

I did however get some pips today. 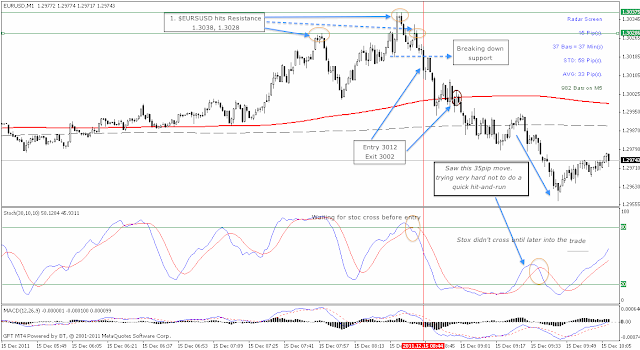 I feel good that I took out 10pips in this 30pip move. My trade entry was a little bit slow. But I had been watching the charts on and off all day since the Asian Session opened.

You would have noticed that I have been marking support and resistances on 1M charts. I haven't put all the statistics together. But I have been noticing that if I match the supports and resistances with a nice stochastics view, I can usually get between 10 to 30pips depending on the momentum of the day.

And here is the same trade, viewed from the M5 chart.
$EURUSD M5 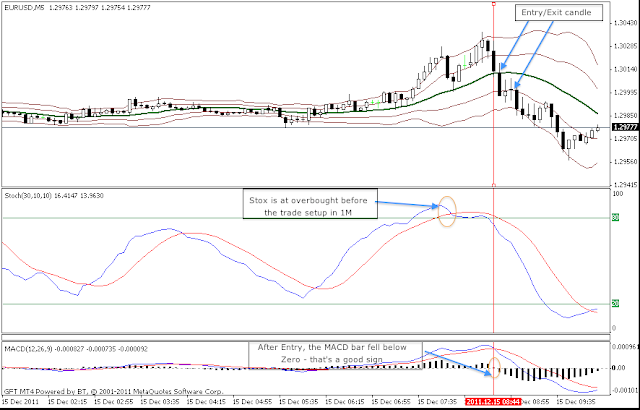 The nice thing on this M5, is that the Stochastics is already in overbought and crossed and moving down. I may have exited a little bit early but the 2 doji's hugging the end of the 1st Bollinger Band was a little scary.


In the midst of all this market activity, I had "The Kid" to make sure he practiced on the piano. At the end of every year, his incredibly patient piano teacher organises a little concert. She gets all her students to perform one piece of music that they have learnt for their parents. It's all incredibly cute, when you see these 5 and 6 year olds walk up to a piano and sit there with their legs dangling.


The kids get to perform a single song which they have been rehearsing for the last couple of weeks. Last year, one little  5-year old (aren't they always little at that age) girl was so nervous, she burst into tears just after she said her name. She went to play the music piece that she had practised. All 5 minutes of it - crying the whole way. Still she played it till the end. And she stopped crying just after she finished playing. Very cute.


Oops, I digress! I blame sleep deprivation. I spent last night trying to make up for losses during the day. So I traded into the US session - and managed to collect back the 40pips which I had lost during the day. After the US lunch session, I had to watch some tv to settle my mind. So here I am with 3 hours of sleep for the day. I am slowly starting to feel like I am levitating when I walk.

Back for the last trade. Thought I might as well include this since this trade setup looks almost exactly the same as the previous one. 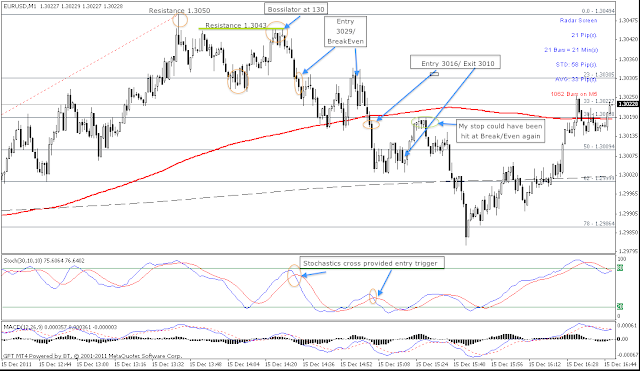 I was trading a little bit wonky even though the trade setup looked very similar to the early trade. Don't mind the Fibonacci lines. I was initially waiting for a Trifecta setup to go with a Buy. (Of course this wasn't going to be with the EURO weakness)


Around Bossilator 130, $EURUSD started to move back towards the SMA200. I used the earlier support and resistance setup to make the entries. The entries were ok, I got stopped out with break-even on the first one. Went in again just after the SMA200 break. It hit 10pips (1:1) but while I was waiting to the 2:1, it started to bounce back up. Since I didn't want to be waiting long, I just took it out with 6pips in the bag. That makes me, all done for the day with 16pips in the bag. On 3 quick trades, I am quite happy with that.

And now, I really have gone into vampire hours. It's 1:30am my time.

I've got to get off to bed. There's an early early morning webinar that I plan to attend. A trading webinar - what else?