Taking that leap of faith with $EURUSD by doing what has to be done. 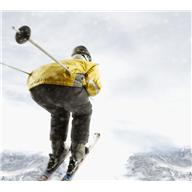 "Know what you are going to do when the market does what it is going to do."

Excuting a trade is a bit like jumping off a ski slope.
Sometimes you just got to leap off that slope when it shows itself to you. I was sitting and watching $EURUSD just before the London open. Bossilator reading was at 350.

Since it already had enough candles and a nice low created, I drew the Fibonacci from a previous high at the SMA800 from 1.3376 to the recent low of 1.3333.

With a Bossilator reading of 350, I was thinking that $EURUSD might just start heading back to the SMA800. So I was thinking that maybe there could be a buy opportunity. Even though the Fibonacci was drawn for a Sell at the 23Fib (28% Fibonacci) mark.  I watched as it started to climb to 3350. 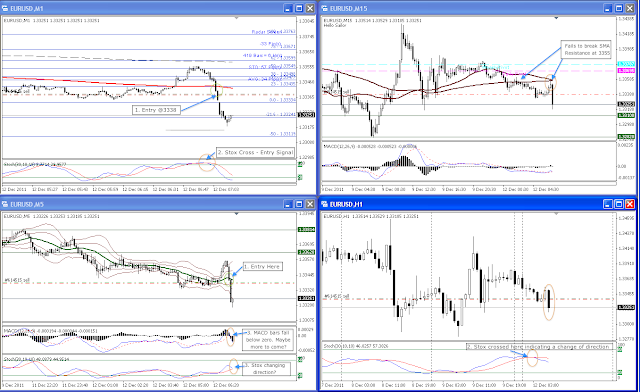 My mind was set for a Buy and all I had to do was to wait for the stochastics. My latest rule which I am  very strictly setting for myself is that after all the setups check out - the 1M stochastics (30-10-10) has to be absolutely at the right spot before I take the trade. Otherwise I am happy to let the trade go, even if it goes in the right direction.


So while waiting for this Buy - a funny thing happened. Right after the German WPI, numbers came out; $EURUSD started to move downwards. And then it quickly pushed past 38Fib. And when it reached the 23Fib, I had a Trifecta trend trade setup. A quick glance at the higher timeframes showed that they were in cahoots - i.e. in the same trend. 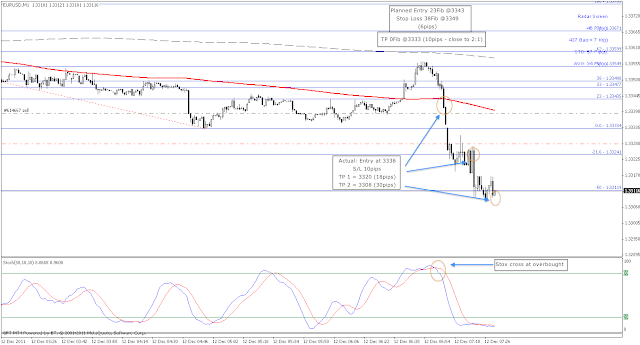 I then let the other half hang in there a little bit longer to see what I could get. As you can see, the 1M stochastics was still below 20. I could wait a little bit more. At 3:, @1.3308 with 30pips for the remaining half position, I just took it all out. It was all I could stand to do.

So that was it, a classically executed technical trade where $EURUSD obeyed all the rules. These kind of days don't happen very often. When they do, you really want to just sit back on your laurels and not trade any more.

That's it for today.

I'd run outside to make snow angels but I live on the equator. It will never snow here. We do have a snow center which makes little snow hills for kids to slide down. It's a 40minute drive away and it'll cost me about 30bucks for the entrance fee.

Instead, I'll just go and have that glass of red wine! It'd be just as effective but quicker.