Just Breathe While You Trade - Part 1

I've watched a lot of guys through the years, and they hold their breath until they finally win The Big One, thinking then they can exhale and chill out. You have to breathe through life, man. Have fun.


Lee Haney
Lee Haney won Mr Olympia (8times) in a row. I know close to nothing about body building but this quote is just so reminiscent of trading.

I have been putting into practice 2 valuable lessons this week. And they seem to have improved my trading a whole lot. By a whole lot, I mean leaps and bounds. 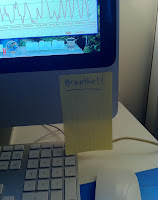 I have this yellow sticky on my computer which says "Breathe". I put it there after I listened to one of my favorite lessons from Trading For a Living - TFL365.com. It's supposed to remind to take a step back and breathe before I take a trade after a setup is triggered.

You see, I have a problem of executing a trade the minute I see my setup triggered. It's because I am always feeling like I am going to miss out on the move is I don't take the trade. And since I trade off  a M1 chart, this will cause many stop loss hits before you get a win. Mentally this is pretty hard to take.

My "ding" moment happened on "Take Your Second Trade First" when Rob Booker use the analogy "wait for a bargain". All of a sudden the bells were ringing and it became clear to me that I loved waiting for a bargain when I shop. So I should use the same strategy for trading.
Yeah, this was simple and effective.  (By the way, thanks Rob for letting me use this free link to Lesson 29 of TFL365.com)

I have been doing this for the last 2 weeks and it has really helped my entry.

Lesson 2: Just Wait
Hot off the presses of the Bossilator webinar on February 12th, I heard Scott Welsh say that his new thing was to wait for as long as possible before exiting his winning trades. He used to look at a risk/reward of 2:1, now he holds them until 3:1, or even more. It was just that he had to accept it might take more losses before the eventual winner.

I have been doing well getting an even number of losses and winners this last 2 weeks taking trades out at 1.5:1. It feel safer and easier than 2:1 or more. The 1.5:1 risk/reward has been helping me break-even on losses within the same day and next. Holding on for longer seems scary and counter-intuitive.

But I really wanted to know how I would feel when I was holding on to the winners. After all you get bumped around a lot because you will keep seeing the winning pips come and go.

It seemed logical but the few times I had tried to sit on a winning trade, it was painful. And I hated losing it after I saw some winnings. But then there were times when EURUSD would keep going in the a  trend for what seems like forever. I mean, wouldn't be  just like flipping the table around in those times when I had held on to  losers for hours or even overnight?

So hot off the presses from the Bossilator webinar on Feb12th, I decided to give it a try.
These charts will have a new Stochastics 10-3-3. I added a new entry signal criteria - also from the webinar.

Today was the one of those days Mr Market smiled back at me. 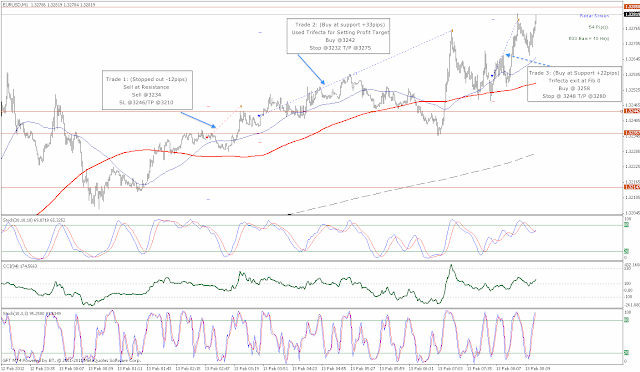 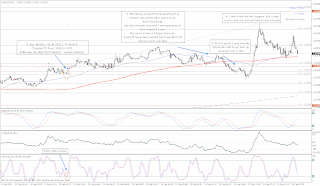 I really couldn't stand it anymore and exited 5pips short of my target @3275. 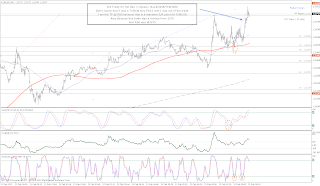 You can see the entry trigger at FIB23.
Bossilator (bars away from SMA800) was 582.
A little higher than normal for a trend trade but worth a try with a very tight stop.
This trade only took 23minutes.  Looks like it was "market  memory" + London Open working here.


By now I was already +43pips up for the day. I told myself to stop.

But you know what - I got greedy in the US session.

Pride comes before a fall. I was feeling a little less invincible but still up for the day. After all it's only a little fall.

It was totally amazing and I was totally drained. It took "industrial strength" mental capacity to hang on for so long. Watching the profits ebb and flow was excruciating but the results felt good.

I am amazed at the power of Breathe and Wait - Take your second trade first to Enter  and Holding On to profits until you can't stand it any longer!!

Seriously this is the best trading day I have had in loong while.
Tune in next time and watch how I handle my winnings.....(or not)