Old habits die hard! So I'm learning to kick them, one trade at a time. 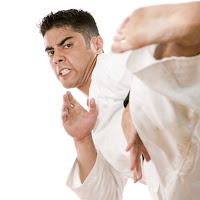 "As I studied the problem, I saw that it wasn't a case that called for reading the tape but for reading my own self."

Edwin Lefèvre: Reminiscences of a Stock Operator (A Marketplace Book)

One year after my venture into trying to trade for a living, I realized that trading was a lot more about psychology than having the "holy grail" of a trading system. Albeit, you need to have some kind of system to base your trade entries. But it's evident that even with a 50% win ratio, you can make money while trading.
Heck, some people are making money even with a 40% win ratio.

It took me awhile to accept that there was magic in practicing good risk management. Heck, it took me at least a year and half into trading before I really understood how to put it in practice.

The philosophy behind risk management is easy. Actually it's downright simple, here's two examples:
Again, the message and the rules are simple. All you have to do is follow those rules. (Here's the duh moment!)

I have had to learn a lot about how to control my impulses in trading.  I still am working at it. My first lessons in trading were trading off multi-timeframe charts, but essentially scalping.  Along the way, I picked up a lot of bad, bad, bad habits while scalping off short timeframe charts. Since I would like to stick with trading on the 1Min chart, I need to work at gouging out some of these bad habits.

Here's one really baaaad habit that I used to love to do. I think I may have conquered it:

Jumping back into a trade in the same direction after a quick win.

Ooooh, I used to "love" doing this. This is a really baaad one.

Act 1, Scene 1: I would make a quick win on a very quick setup. And the currency starts to move again - in what seems like the same direction.

Act 1, Scene 2: I jump back into a trade, purely based on a very short term price action. Ignoring any indicator behavior. By now, I think I've figured out how the market will move. (Famous last words).

Act 2, Scene 1: Guess what happens: Yep, the currency hits a strong support/resistance point - and it starts to retrace.


Act 2, Scene 2: And where does it generally go, it's trying to go back to my stop. And more than not, I'm frozen like a deer in the headlights, and I lose double my stop loss. Sounds familiar now?

Act 3, Final Act: Boom goes a one whole week's worth of profits! I slap myself in the face and tell myself not to do that again.

Well - you get the picture.

Trade 1 and Trade 2 were basically good entries. Trade 1 was a really bad exit because I moved my stop. It was a classic deer in the headlights situation. After I mentally recovered from Trade 1, I took another counter-trend trade (Trade 2). This time the exits were better.

Trade 3:  Out of sheer frustration, I jumped into this one. I was quickly stopped out.

So after 3 failed trades with multiple contracts, I decided to just forget about the day and take a break. At this point, I have drawn down all of last week's profits.  I distinctly remember telling myself - too darn bad. Sometimes you are just out of sync. I wasn't even going to wait around to take another trade.

After dinner, and a one and half hour break. I decided to look for a possible setup, just after the US session open. By now, the Bossilator on $EURUSD on 1M was at 800! This is serious counter-trend potential.

So I went ahead and took Trade 4. This went better.  So I quickly added 1 more contract to the trade.


It was a good superfast trade. I exited just before SMA800 at a nice 3:1 with 30pips. But if I had waited 5 or 6 more candles, I could have exited with another 10pips!  But I didn't want to wait. $EURUSD kept moving down  and I was still about 20pips down from the earlier losses. And I was not in that trade.

And now, drum roll please; I just walked away from MT4. I didn't try to jump back in. Even though it kept going down and went down to the Daily Pivot - another 25pips  further down.

I really feel like I may give this nasty habit the boot!  It may be a bit premature to celebrate.

But hey, you just gotta celebrate every little success that you have. And work on it one trade at a time....